What does the Bible say about Psychics and Mediums? (Jan, 2023) – Sunshine Readings 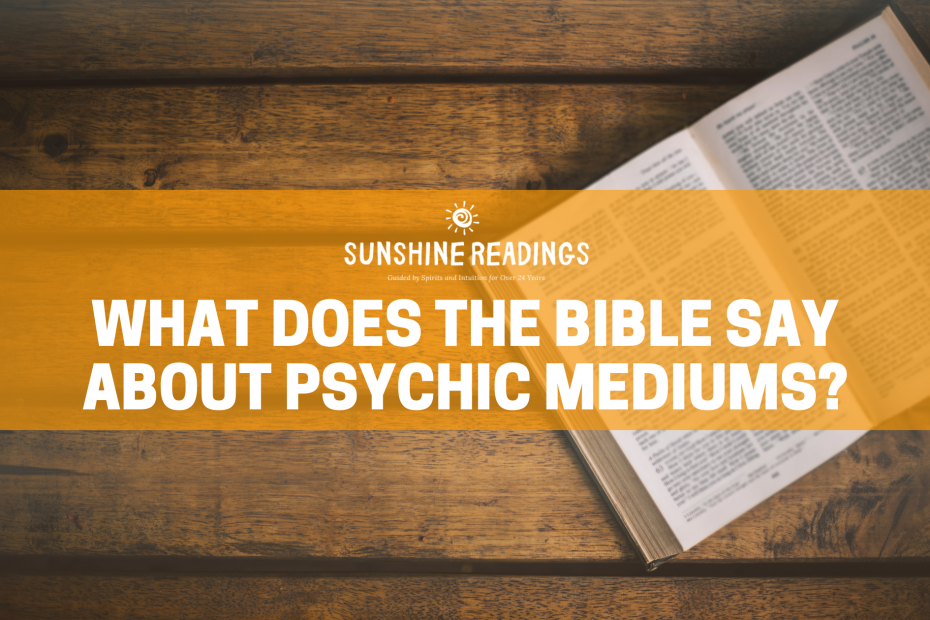 If I’m a Christian, can I consult with a Psychic or Medium? What do Psychic Mediums say about Jesus? What does the Bible say about Psychics and Mediums? All this and more in today’s blog!

While Religion and Spirituality have always shared the goal of helping individuals connect to the grand creative force surrounding us, they also have many points of conflict; one of the biggest is how we access, interpret, and experience the Divine.

In religion, we’re taught to find our connection to a Higher Power through the church’s leaders, trusting their advice as the mouthpiece of God above our own inner counsel. In spirituality, however, we’re more called to seek wisdom and connection from within ourselves. We trust our insights and intuition above all others.

That’s a significant point of contention, isn’t it? Especially if you’re a deeply intuitive person brought up in a conservative religious home. You’re probably ALWAYS second-guessing yourself, aren’t you? It might be a conflict in your learned beliefs over your chosen beliefs.

Let’s dig deeper and see if you’re ready for an update of beliefs!

What does the Bible say about Psychics and Mediums?

I was raised Catholic, and I have a Christian background. My grandmother, a devout Catholic, a powerful Christian woman herself, was a Medium, and she said she referred to it as talking to the angels. I was pretty fucking lucky to have a balanced and expansive view of religion and spirituality, but many people don’t have that.

When you open up the Bible and do some research, multiple passages advise staying away from Mediums –they didn’t call them Psychics back then. They were called Diviners, Seers, Sages, Sorcerers, Necromancers, and more.

Leviticus 19:31 “Do not turn to mediums or necromancers; do not seek them out, and so make yourselves unclean by them: I am the Lord your God.”

They also encourage the killing of Mediums, so there’s that.

Leviticus 20:27 “A man or a woman who is a medium or a necromancer shall surely be put to death. They shall be stoned with stones; their blood shall be upon them.”

Clearly, the Bible does not speak kindly of Psychic Mediums, clairvoyants, and folks who practice magick, witchcraft, and sorcery. But then again, when you are genuinely doing a deep study of the Bible, and you start to explore original translations and ask critical questions, an interesting trend begins to appear.

I’ve never done a deep intensive study myself, and maybe I carry some mass trauma still prohibiting that, but I have followed the experiences of others who HAVE gone fully into this, and here is what they share.

Biblical versions, translations, and original texts must be considered.

When you do those studies, you realize that various areas within the Bible can sometimes contradict themselves. Old testament v. New testament debates wage on thousands of years after being written. Did one do away with the other? Does one overrule the last? Scholars still can’t decide.

They can’t even settle on the correct translations of vital words like “God”! So we must accept that the current translations are educated guesses at best, and much is only understood accurately in the context of the time and state of politics.

Yes, politics and religion often go hand in hand, especially when you observe the likeness between mediums, sorcerers, and… prophets!

The line in the sand is drawn not by mediumship itself but by WHO is doing it.

When you start to understand the history of the Bible and how it was created, you may be surprised to know it was all done through channeling.

Yup, I went there. Channeling is when a person serves as a medium, or mouthpiece, for a spirit or entity.

Prophets received their messages in numerous ways and described it as “the Spirit of God resting upon them.”.

Deuteronomy 18:14–22 discusses that God says not to listen to sorcerors and diviners from other lands but that he will raise up a man, a Prophet (like Moses), who would be the mouthpiece of God via divine messages. He continues, saying that the way people can know that the Prophet’s words are from God will be to wait and see if they come true. If they come true, it was God’s word. If it doesn’t, the Prophet spoke of their own presumptions, and he should be ignored.

It only makes sense to wonder about the similarities between Prophets and Mediums.

Suppose they do the same things and experience the same things. They serve the people with divined guidance, and the only difference in them being “good” or “bad” is measured by whether or not their words come to pass –thereby meaning they came from God– this opens the door for much more expansive decision making.

We’re not done yet, though! What about Jesus and Mediums?

What do Psychic Mediums say about Jesus?

With a lot of confidence, I have done documented research on this one to see what others believe, and I also have my own perspective as a Psychic Medium to share.

I know many Psychic Mediums that are devout Christians. They are still practicing and following the Christian faith, and they still believe in Jesus. They still pray to Jesus. They still believe in the power and the miracles of Jesus. Numerous Christian mediums out there believe God is telling them that they have a relationship, that they can see and even speak to Jesus, and I will tell you, I am one of them.

I believe very much in Jesus and His teachings and what he has done. I also know that there are Christian witches that are out there. I know the Catholic priests who practice witchcraft and embrace their Psychic Mediumship abilities.

So what do Psychic Mediums say about Jesus?

They say he was a fantastic man. I can’t imagine a single Psychic Medium that would not share the same sentiment about him. Once upon a time, we walked the face of this Earth and knew and understood that love over anything else was our most significant, most powerful, life-changing force. When we lived with love in the forefront and made our choices out of love –love for ourselves and others, that life would be beautiful, blessed, and well lived.

Now that I’ve shared what the Bible says, how time and context show inconsistencies, what divine messages are, and what psychics say, I’d like to bring this to a close by asking what YOU say.

Is it time to update your beliefs about Psychics, Mediums, and the Bible?

Questioning your beliefs often leads to further inquiry about the judgments we each have developed over our lives that make talk of Psychics and Magick enjoyable OR damning, depending on your perspective.

Some of you may be on the fence about choosing what to believe, which might be because of your very strong Christian or even religious background.

In one of my previous blogs, we answered the question, Are Psychic Mediums Real? We also explored belief’s role in accepting or rejecting this topic’s validity. This might be a worthwhile read for those wanting to learn the facts to form your own thoughts instead of carrying around judgments and stories that limit your ability to connect with yourself AND the Divine Source/God more intimately.

I’d love to hear what this blog has stirred within you in the comments below! What do YOU believe about Psychics, Mediums, Prophets, and the Bible?

You can find more about Sunshine and her offerings on her website. https://www.sunshinereadings.com/category/spirituality/

P.S. Sad that you missed out on joining Sunshine’s magickal membership? Then we have fab news: you can still register through this link! This subscription gives members personalized access to Sunshine as well as weekly live workshops and seminars designed to awaken your own magickal gifts. This is the place to be for anyone ready to become a badass witch.

“Only when we know our own darkness can we sit in the darkness with others.”

Sunshine is a Psychic Medium, Soul Healer, Spiritual Advisor, Shadow Worker, Eclectic Witch, Practiced Magician, Recovering Alcoholic and founder of Sunshine Readings. Her passion is helping others learn how to step into their shadows so they can uncover their magickal gifts needed to remove any energetic blocks to their soul’s enlightenment. You can find more about Sunshine and her offerings on her website. 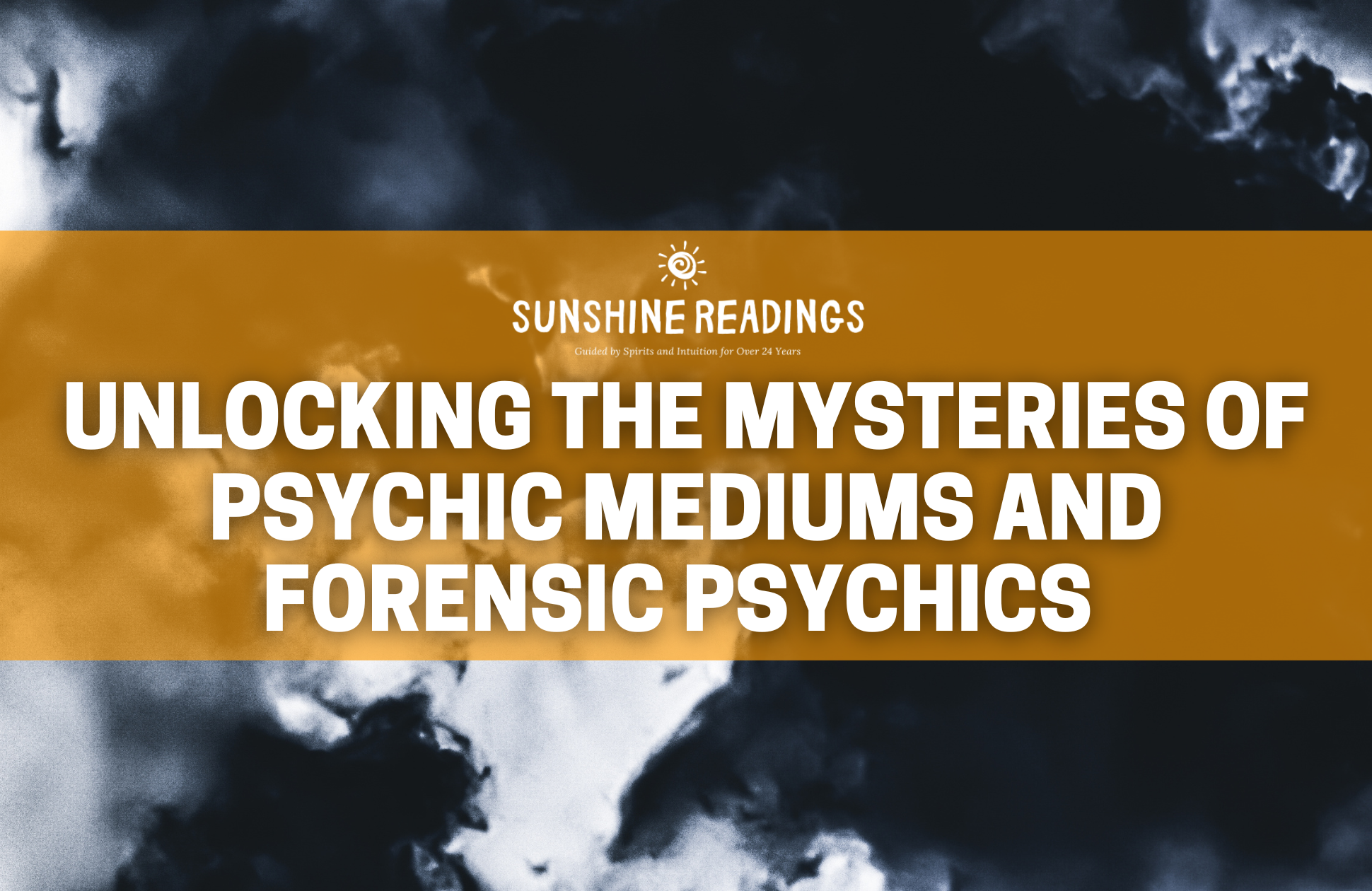 Have you ever wondered what makes psychic mediums and forensic psychics so intriguing? Maybe it’s their mysterious ability to delve into the most intangible corners of our minds, or perhaps it’s the way they reveal something new about ourselves in every reading. Whatever the reason may be, these spiritual experts have been helping others find clarity for centuries – from understanding past events to discovering hidden motives.

In this blog post, we’re going to take a closer look at some of the mysteries surrounding psychic mediums and forensic psychics: how do they communicate with spirits? What insight can they provide us with when solving crimes? So if you’re ready to unlock the secrets behind one of life’s greatest gifts, read on! 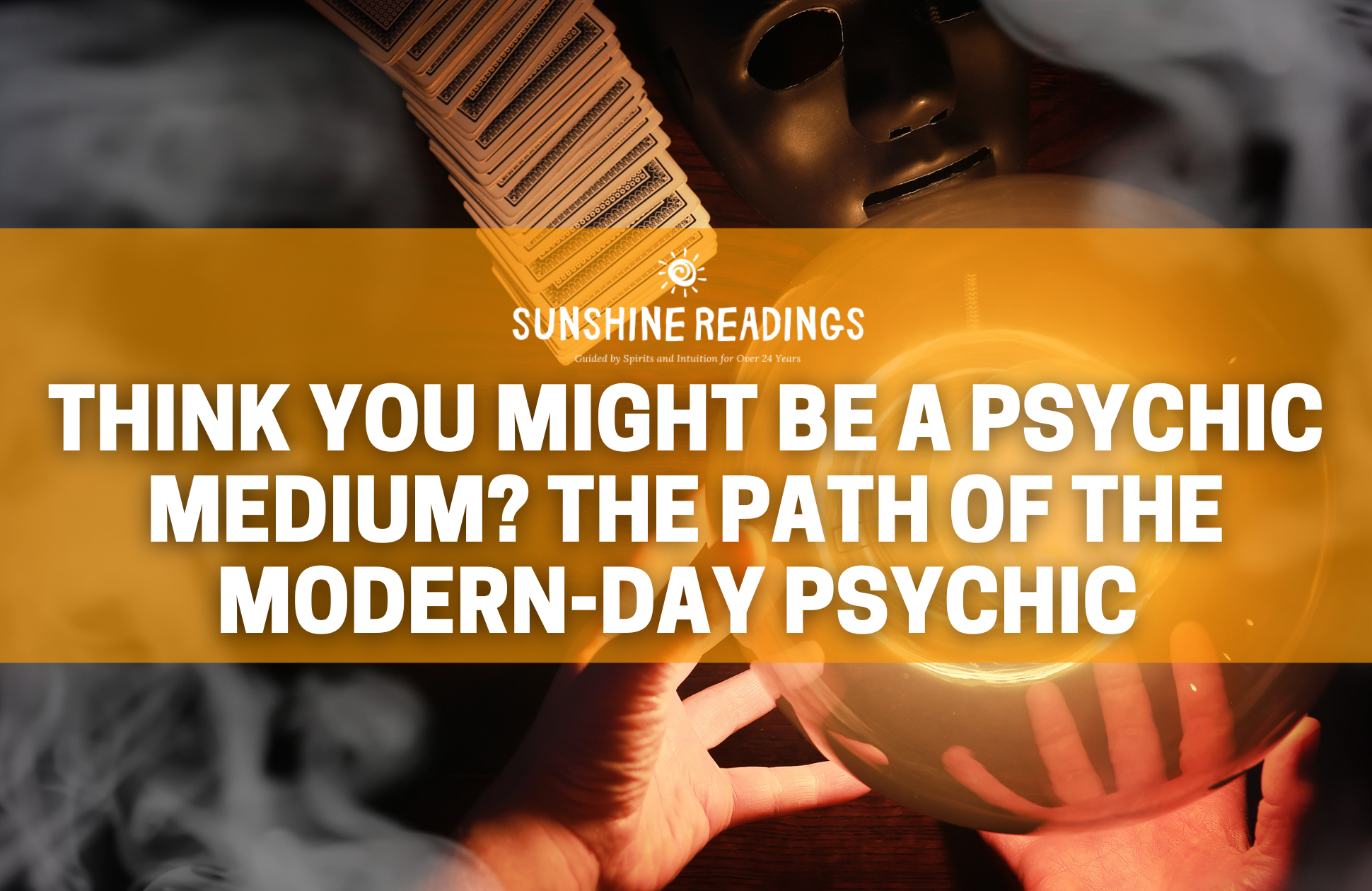 Think You Might Be a Psychic Medium? The Path of the Modern-Day Psychic (Feb 2023) – Sunshine Readings

Do you ever have a thought that just hits you suddenly, or find yourself in situations that you have no explanation for? Do these momentary occurrences leave you wondering if perhaps you are special after all and potentially gifted with psychic abilities?

If so, then it’s time to embrace the calling within your heart and start exploring psychic mediumship! This incredible practice can open up worlds of possibilities – both big and small – that change how we experience life. 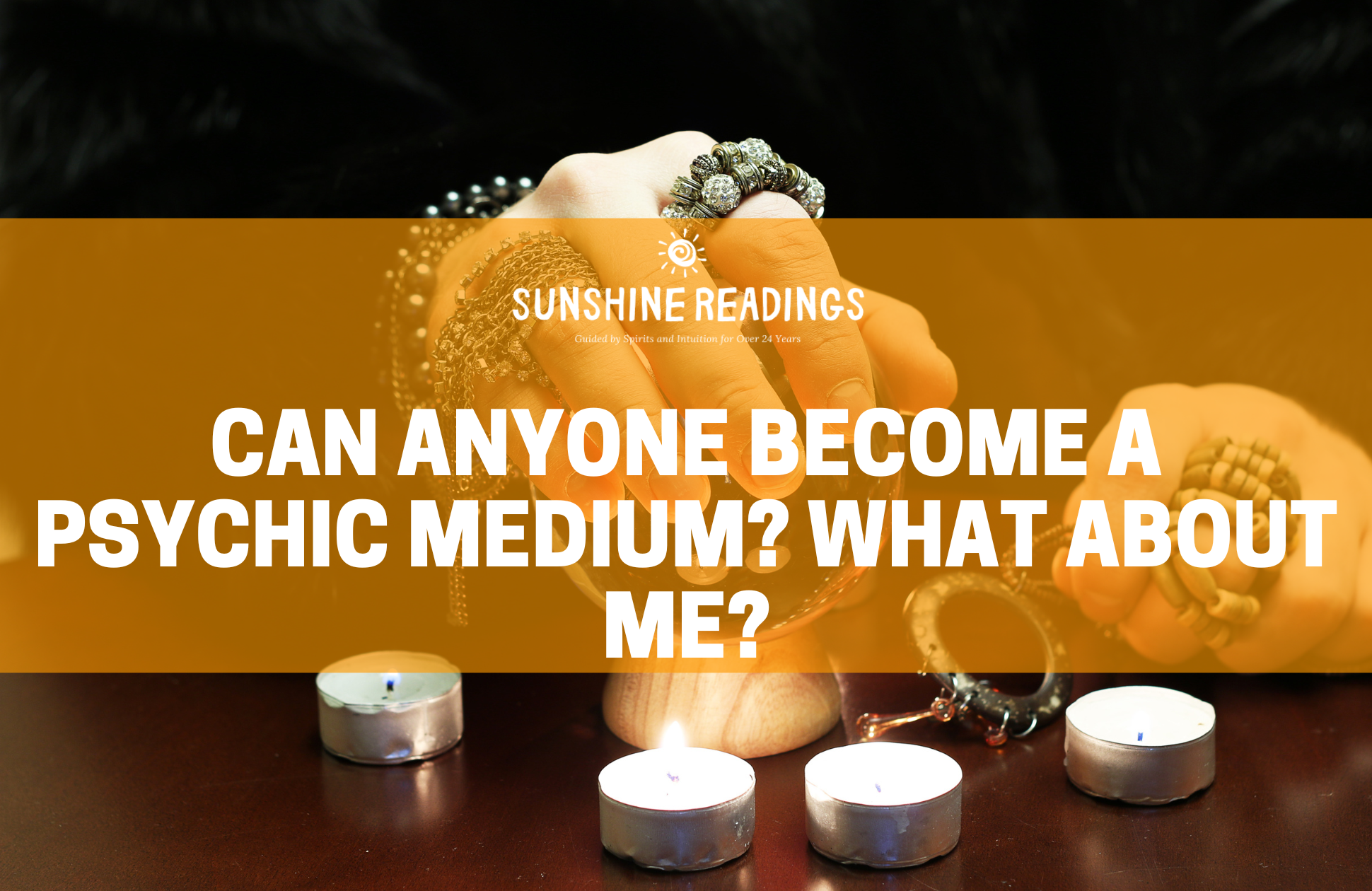 Can Anyone Become a Psychic Medium Reader? What about Me? (Jan 2023) – Sunshine Readings

Psychics, Mediums, and Intuitives are becoming more widely accepted AND in demand as people crave insight into their own lives and experiences that feel… meaningful. Have you ever wondered how you can become a Psychic Medium?